CraftOS-PC includes built-in screenshot and GIF recording support. This allows you to take screenshots and videos of the CraftOS terminal at any time, which can be useful when demonstrating a program. It also doesn't require any external tools such as Snipping Tool or recgif.

A screenshot can be captured by pressing the F2 button. The resulting image will be saved in screenshots in the CraftOS-PC save directory, with a file name with the time and date. The image is saved in PNG format, ready to be viewed on the Internet or edited in a photo editor. Pressing F12 will also take a screenshot, but the image will be available on the clipboard rather than being saved to disk (Windows & Mac only).

term.screenshot() can also be used to take a screenshot.

Recordings can be taken by pressing the F3 key. A red circle will appear in the corner of the window, indicating the screen is being recorded: 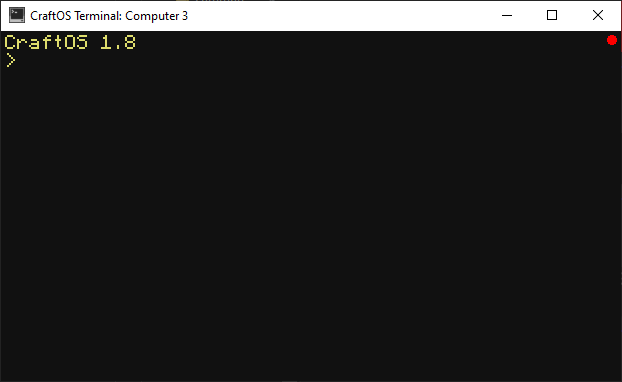 To stop recording, press F3 again and the recording will be saved in screenshots in the CraftOS-PC save directory, with a file name with the time and date. The recording is saved as a GIF, which can easily be posted to a GIF-hosting website such as Imgur.

By default, WebP is disabled. Even though all modern web browsers and operating systems support WebP, not all of them support animations, with Discord being a big concern. If you do enable WebP, keep in mind that compatibility is not as universal as PNG or GIF.

When the config option ignoreHotkeys is set to true, F2, F3, and F12 will no longer take screenshots or recordings. Use term.screenshot() to take a screenshot instead.